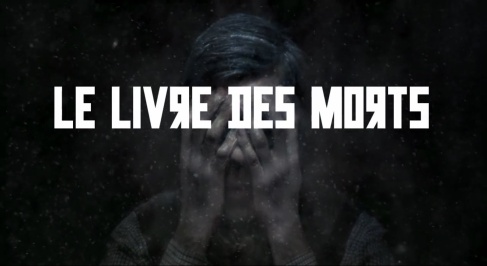 Last night, Toronto-based Daring Independent Film Festival featured Alain Escalle’s outstanding experimental short film Le Livre des Morts (The Book of Dead). Escalle is known to travel as he directs, taking inspiration from various places such as Japan, Germany, United States, United Kingdom, Belgium, Czech Republic, Ukraine and Thailand. Viewers’ attention leans towards the mesmerizing artistry of Escalle’s visual effects that is truly one of a kind in the film industry. The film’s symbolic visuals and overwhelming eerie music unravel a tragedy of a man who journeys alongside the ghosts of his past.

Although lacking dialogue, Book of Dead demonstrates that silence reveals more than one typically assumes. Haunting memories absorb the barren territory Micha resides in and shatters it to pieces before viewers’ eyes. Initially infested by creatures associated with negative superstition, the territory becomes further infested by Micha’s dark past as a concentration camp prisoner. Books, suitcases and nude lifeless figures pile up. Zombie like individuals appear; walking aimlessly as though lost in this shattered world.

Escalle’s film is one of mystery that overwhelms the senses. His work is not at all average; it is a work of art that one should not miss out on!